Why The 2015 Ford Mustang GT Is Impossible Not To Like 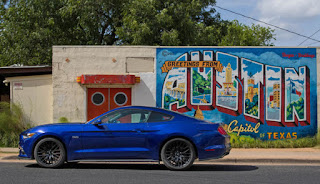 Surely you’ve done this countless times. You’ve been out driving, absent-mindedly checking out the other cars on the road, when you come across a 2015 Ford Mustang. They’re everywhere these days. And when you see one, your eyes immediately drift down to the front fender in search of the two numbers and a decimal point that make all the difference in the world: “5.0.” Five-point-oh. The thing that separates the V6 rental cars and the EcoBoost posers from the real Mustangs. That, and the GT badge on the trunk, means that Mustang has eight cylinders of American fury under the hood. That means it’s not messing around, that its driver is someone who cares about speed and not just looking good.

That’s the perception, anyway. With the smaller engines both offering at least 300 horsepower, as well as potent straight-line and backroad performance, you’re not exactly screwing yourself if you don’t go V8 with the Mustang these days. The 2.3-liter turbo four EcoBoost is faster than most V8 Mustangs have been through the years. But the GT remains the top dog of the current Mustang lineup, and that’s just how it’s going to be, no matter how much power its little brothers put out. So what’s it like to actually drive one? Does the 5.0 deserve that reputation or not?
(Full disclosure: The Ford Motor Company needed me to drive a 2015 Mustang GT so badly they dropped one off at my house with a full tank of gas for a week. I spent months asking for one because I really, really wanted to drive it.) 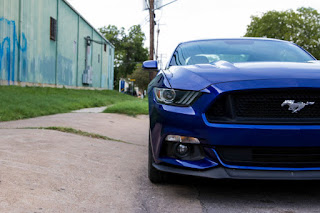 I have an unpopular confession to make: I am not, nor have I ever been, a Mustang Guy. Don’t get me wrong, the original is a classic that deserves every ounce of its iconic status, and the ’71-’73 Mach 1 is a car I’d rob banks to own. And then probably rob banks with.
But I’m 30, and for much of my life — with a few truly great and notable exceptions — Mustangs have been kind of ugly, or poor in quality, or lacking in performance compared to European and Japanese rivals. They always seemed aimed at your hardcore Mustang Guy (or Gal), not winning over new converts. Then something interesting happened around 2010: the Mustang started getting good. Like, really good. Like, embarrass a BMW M3 on a track good. (By the way, I’ve heard from people inside and out of the company that the Bavarians are still pissed about how that went down.) Suddenly the Mustang was back where it belonged, at the top of the global performance game and locked in a speed war with rivals from Chevrolet and Dodge — plus any import that wanted in on the fight too. Happy times were here again. 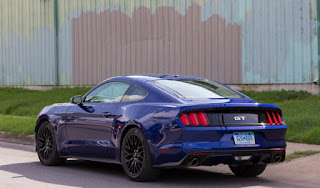 I got more compliments, thumbs up, camera phones whipped out, questions about “How many horses does that bad boy have?” and friendly waves in this blue Mustang GT than any car I’ve driven since that McLaren 650S. Like I said, the new-for-2015 Mustang is everywhere these days, but when people see a GT, they know it’s something special. Everyone loves this car, if not for its performance but for what it represents. V8 glory. American iron from the past, updated with Bluetooth and navigation and satellite radio, here to take on a modern world. It took the Mustang’s looks a while to grow on me, but having seen a bunch of them in the wild and having driven this gorgeous, option-heavy Deep Impact Blue example, I’ll admit I’m a fan now. It walks the line well between being stylish and aggressive without being overcooked, and it succeeds in making the previous car look bulky by comparison. It’s what a Mustang needs to look like in 2015.
The improvements are more apparent when you sit inside, where you get a cabin that’s attractively designed and, despite a few hard cheap plastics here and there, feels like an upscale car. Lots of nice touches inside, like the “Ground Speed” text on the speedometer and the vacuum gauge above the infotainment system. (It’s a boost gauge on the EcoBoost.)

But you’re not here to read about how the Mustang looks inside and out. You know that, you’ve seen it around. You wanna know how the GT performs. And the answer is “real good.” The 5.0-liter V8, a carryover from the old Coyote engine with some Boss 302 goodies thrown in for extra fun, puts out 435 horsepower and 400 pound-feet of torque. The 0 to 60 mph dash happens in   about 4.5 seconds. The quarter mile is executed in the upper 12 second range.
Numbers don’t tell you that the Mustang GT pulls hard and steady from the midrange and charges up to its 7000 RPM redline in a smooth, linear, reliable way, like a freight train. This is a wonderful, modern V8 with old-school character that will get you addicted to speed.
What the GT isn’t is some crazy, balls-out, extreme speed machine. Ford definitely left room for the GT350 and GT350R. Instead, the GT is a pretty-laid back cruiser capable of effortless passes, storming backroads and laid-back daily driving. Most of the time it’s pretty civilized, but still enough to blow the doors off most other cars you’ll encounter on the road.
Even in its sport and track modes it’s pretty well sorted and easy to handle even under the hardest of straight-line acceleration. In short, it’s exactly the accessible, everyman performance car that a Mustang GT should be.
A big part of the fun is the rumbling eight-cylinder tenor, which is all-engine here and not a bunch of turbo-muffled computer-fed fake nonsense. You’ll be doing hard highway pulls every chance you get just to hear that noise. The sound is very bad for your fuel economy. (I averaged about 19 MPG the week I had the car, in case you’re curious.) Some critics have said it’s too quiet; I think it’s about perfect for a stock Mustang GT, and if you want more, you have a huge aftermarket to back you up. The V8’s audio track alone here is worth the price of admission. I wish every car sounded this good. 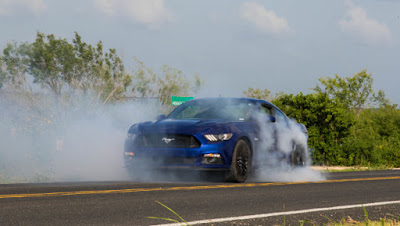 I have to mention Line Lock, which is a fancy way of saying “burnout control.” Not launch control, mind you, burnout control. Here it’s all digitized and done through the track apps suite. Just set it the car in track mode, hold the confirmation button, press the brake hard, and then the car hold the brakes in place while you spin the tires and light some fires for a full 15 seconds.
I’d be remiss in my duty as a journalist — nay, as an American — if I didn’t test it once or twice. Does it work? You bet your ass it works. It’s how I got those photos up above. (I do think the name Line Lock is too weak to adequately describe what it does. I preferred to call it the Mechanized Unified Systematic Tire Annihilation & Nullification Generator, or MUSTANG.) Sick burnouts has never been easier. Here, it’s almost too easy.
But hey, Mustangs have always been about clutch drops and tire spinning. Now the big news is that the Mustang has an independent rear suspension — like a modern car, holy shit! — so now it can actually handle. It doesn’t feel like a lowered pickup truck anymore, and its rear end doesn’t get unsettled whenever there’s a hard bump in the road. The ride quality and Brembo brakes are both stellar, but I can’t say the same for the Recaro seats up front, which were over-bolstered and manual in operation only.
Granted, it’s on the heavy side. At a hair above 3,700 pounds, nobody will mistake the Mustang for a pure sports car. While the suspension and chassis upgrades from my tester’s performance pack make body roll nonexistent, you can feel that weight in the corners. The good news is that it’s smaller than a Camaro and certainly a Challenger, and it feels it, 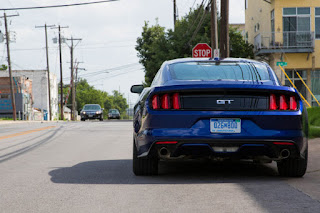 making it much easier to manhandle through corners. The performance pack, by the way, is something I think you’ll want. Better springs, bushings and dampers, upgraded brakes, a strut bar, a front splitter, a 3.73 rear axle ratio, a Torsen differential, 19-inch wheels and summer tires, all for $2,495. Do it.

Want to feel extra patriotic a few days after the 4th of July? Ask yourself why every American car seems to have the Europeans beat in terms of steering feel and response with electric racks. What you get in the Mustang (and the Corvette Stingray, and the ATS-V) is consistently better than the stuff from BMW and Porsche. Up your game, Germans.
My tester came with a six-speed manual gearbox. If you buy this car, don’t get the automatic. Please. The manual is very, very good. Shifts are short, tight and heavy, perfectly weighted. Pedals are perfectly spaced for heel-and-toe downshifting. The clutch felt on the hefty side, but that could be chalked up to 10,000 miles of hard press car abuse more than anything else. 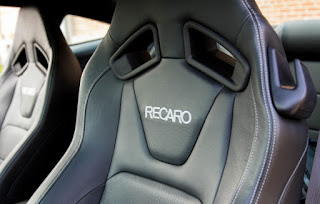 Forget all the numbers and the tech and the upgrades for a moment. The most important thing about this car — the most important thing about any car, really — is how it makes you feel. And the modern Mustang GT will make anyone feel wonderful. It’s one of the more satisfying cars I’ve driven in a while. Something about driving this car with the windows down on a summer evening, as the Texas sun set all around me, with that pony logo on the steering wheel staring back at me and the sound of the V8 in my ears... it made me feel good. Content, even. This is what driving is supposed to be about, I said to myself. We had all better enjoy this thing while we can. It’s not like American V8 cars are as in ready supply as they used to be. 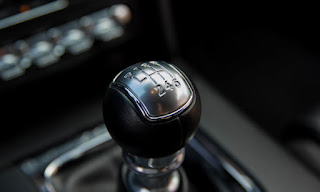 Simply put, the Mustang GT is a car that’s impossible not to like. Even if you’re some kind of seething, die-hard Camaro fan, the kind of person who has the decal where Calvin pees on the Ford logo stuck to the back windshield of your Z/28, you at least have to appreciate how good the competition is and how it pushes your car to be better. We’re in a new
golden age of American performance. That’s something we should all be happy about, no matter which team you swear allegiance to.
The downside is how much you have to be willing to pay for all of it. The GT Premium, with comfort and convenience options you’ll want, starts at $36,300. The loaded blue tester you see here came in at a fairly shocking $45,885. That includes the Shaker audio system ($1,795), adaptive cruise control ($1,195), the aforementioned GT performance package ($2,495) Recaro leather seats ($1,595), voice navigation ($795) and other options. Honestly, you can skip most of those options except the must-have performance package, but even then it ain’t cheap. A decently-equipped GT can now easily touch $40,000.
At this price, the Mustang GT is no longer really the everyman’s performance car, even if it behaves like one. It’s the Mustang for the die-hards, the hardcore Mustang enthusiast who will have nothing else and has the cash to pay for it. It’s a bargain Corvette, if not in outright performance than in appeal. The rest of us will make do with the Mustang EcoBoost which is now priced to be the true people’s speed machine. Nonetheless the GT is too good to ignore and still the best Mustang of the moment. Impressive as the other engines are, the V8 is still worth it if you find the spare change in your couch. It just offers things, tangible or otherwise, you probably can’t get in a turbo four or a V6.
If you weren’t a Mustang Guy (or Gal) before, this is the Mustang that will change your mind. 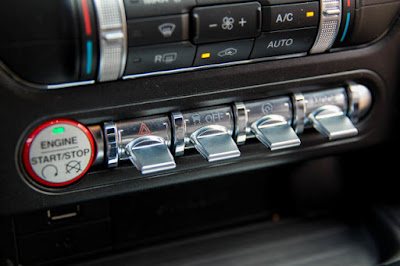 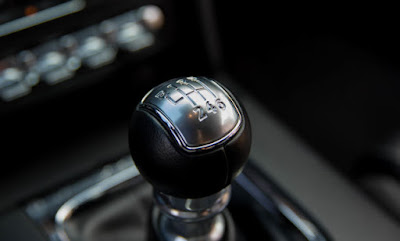 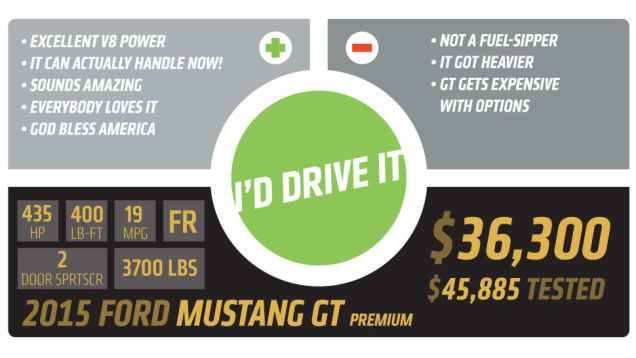 All photos credit Kurt Bradley
Contact the author at patrick@jalopnik.com.
Posted by Anderson Ford at 2:35 PM